The information on this page is preliminary and will consistently be updated with the latest information.

Nordix Infrastructure Team provides Infrastructure and CI/CD support for all the projects incubated in Nordix. The tools and services provided by the Infra Team are  accompanied by the practices followed by the vast majority of the open source communities.

We are constantly working on bringing in new technologies and employing best practices in order to provide the best possible CI/CD for the projects incubated in Nordix and the members who take part in Nordix.

Aside from providing CI/CD support for the projects, Nordix makes the establishment of delivery pipelines for the members of the community possible in order for them to work with open source directly and deliver/consume the work immediately for their purposes.

Apart from the deployment of the scenarios themselves, the deployments are tested using OPNFV Functest and OPNFV Yardstick from functionality and performance point of view to ensure what is deployed satisfies the users' needs.

This essentially allows Nordix to provide one-button deployments to Nordix Community and anyone who wants to try out new technologies. 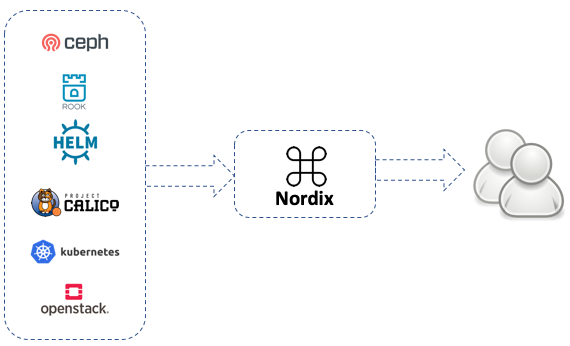 Currently, the main focus is on Cloud Native Technologies but this will be expanded, including Open Infrastructure, Network Automation, and other technologies.

Utilized open source tools, technologies and their versions are

Nordix uses Jenkins as the CI-Engine.